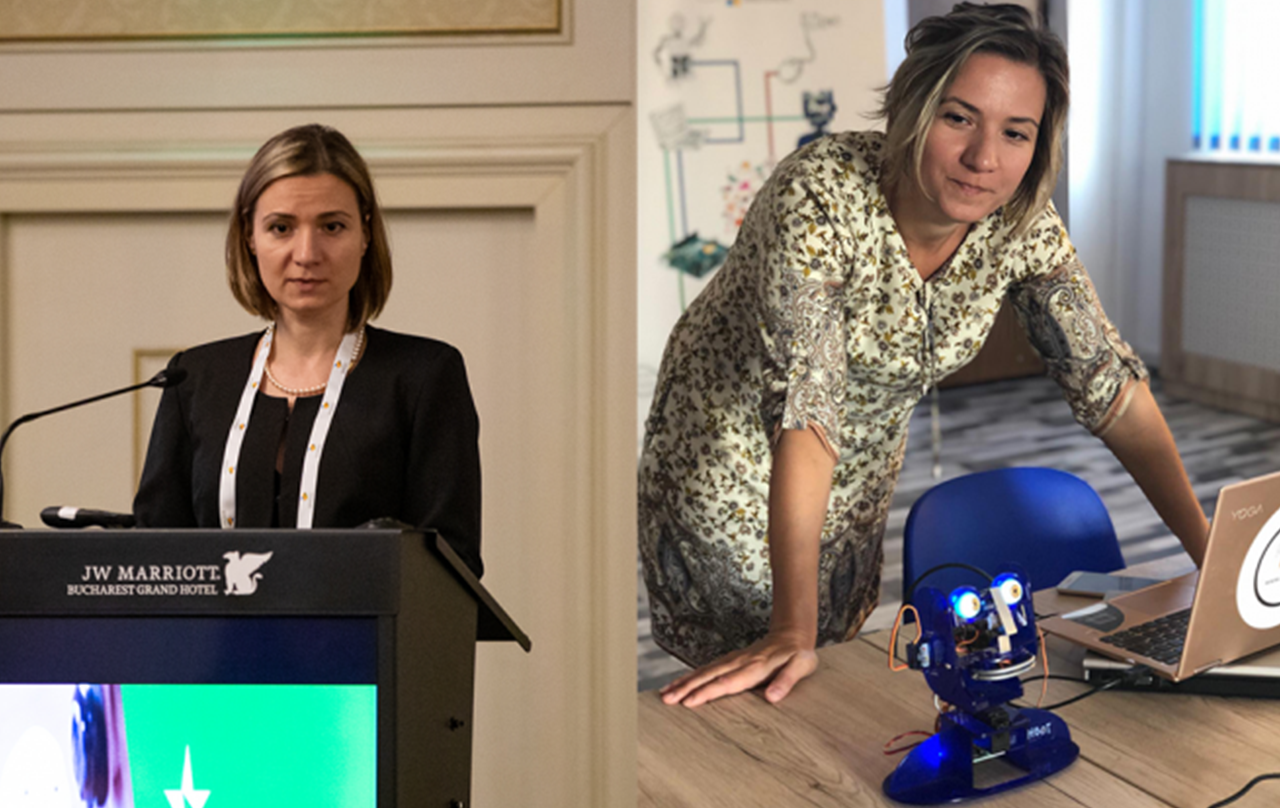 Ana-Maria Stancu: robots can save our lives

Robin Williamson interviewed Ana-Maria Stancu about the possible use of robots to help humans in the COVID-19 pandemic.

Dr. Stancu, thank you for your time and collaboration. For the people watching this video, could you tell us about your role and responsibilities?

I have two jobs. One is that one you see on my back, the Robohub, space where we do educational robotics for children, mostly for children of vulnerable groups who could not afford it in any other way. And the other job is CEO of Bucarest Robotics, the first company in Romania for humanoids and service robots. Out activity is to integrate robots that are already on the market. We buy them, and we produce software for integrating those robots in the activities of the clients.

I Can imagine that this is a fast-growing sector.

I would love to say that yes, it is but it’s not because from my point of view robots don’t get deployed as fast as they should at this point. They’re pretty expensive well if we compared to other automatic machines on the market, but considering that they’re robots, they’re not that expensive for the technology that lies behind them. Basically, the problem is that if clients don’t buy enough robots, the price won’t go down. What we need to do is more robot deployment. We are always looking at the market, and there are several types of robots for each industry. I don’t believe at this point we should do more research. I think we should do more sales and integration and then from those, learning from what we see and work with the client directly. What are the new needs start from there and do more research, but otherwise I think it is crucial right now to have more deployment.

Thank you, a very good idea. This brings me to my next question. If we consider the current world-wide pandemic health emergency how can robots help you in this particular period?

I try very hard to convince people that robots would have been the answer right now. There are some hospitals in China that are deploying them, but not even China is using what they could do, and in Europe, I haven’t seen any example. For me, it is a sort of radiography [of the current situation in robotics, NdE]. Right now, we are where we are because we invested so much money in research, but when it comes to real action, like today, we don’t have robots in the hospitals.

I’m now looking for a sponsor in Romania, proposing the hospital in the future. In hospital today we can have cleaning robots, that clean completely autonomously; and we could introduce the disinfection robots. This means the medical personnel doesn’t have to enter [too often, NdR] into contaminated areas. Which actually saves lives. And you know very well in Italy that this is the biggest problem. Robots could save lives. Besides cleaning and disinfection robots, there are also service robots. For example, we have one robot that is a waiter that could deliver the food to patients. There are also robots that look like drawers where one can put stuff in it and send it out.

There are robots for telepresence that could be used in hospitals so that the staff doesn’t have to go inside the contaminated areas. The robot could take, for example, the patients’ temperature, and the human staff intervenes only for actual necessities.

Basically there are so many robotics solutions out there that are not being used because people didn’t think about it before. My disappointment is that apparently, we didn’t fully understand how robots can help us. Many words about this were said, but we didn’t internalize it.

Yes, robots could have helped me immeasurably in the treatment of this disease in the true sense of isolating the patients and only having human contact with strictly necessary indeed. That was a particular robot you indicated earlier, that is a hygiene robot from Denmark if I’m not wrong. Can you tell me some more about how this robot works?

Yes, this robot [it is produced in Denmark by UVD Robotics], we consider it to be the best on the market. There are also some copies in China, but the Chinese government decided to buy the one in Denmark because it is very professional. Its innovation consists in the fact that the ultraviolet UVC light for disinfection, as it is done in all the hospitals in the world, is not spread manually, as it is normally done, but by the robot. The UVC light inactivates germs only in a range of 1.5 maximum of 2 meters. So, if it is done manually, the light is usually put in a corner, and then you have a person who moves periodically this light to cover 2 meters room.

With the robot, you program it, and the robot goes around the path in the room autonomously. You can also set some disinfections points you want to be cleaned. It moves with the very low speed with the lights on, and you can also set some special disinfection points that are more problematic in the room, like next to the doors, because lots of germs are on the doors,

I saw an image of this robot, and it is tall, it is around 1,70 m. This means that the range is wide, that can help, additionally.

Yes, it is better also compared to other methods of disinfection. For example, when spraying something like biocides or similar, you have to wait half an hour or 45 minutes until you can enter the room. With this robot, one can enter the room the minute after the robot shuts down the light. The robot has also a tablet that you put it on the door when you let the robot working it. The tablet has a movement sensor so that if anyone opens the door the light shuts down.

Robin Williamson. There is am emergency shut off.

Yes, the UVC light is dangerous for the human body, and this is another precaution. When you assign the robot its disinfection mission, you have to press some checkpoints that there is no one inside.

Regarding the workers, is this robot easy to use for typical Hospital Staff?

Our company does the integration, that is adapting the robot to the given environment. We do the SLAM (Simultaneous Localization and Mapping), which is mapping the place and after we do that the robot has in its tablet all the needed maps. Then, for the staff, using the robot is like handling an application on a smartphone like a joystick. It is really easy to use.

Yesterday I was in a hospital outside Bucharest there was a 60-year old head nurse there and she told me she loves the robot.

It is really user friendly. You mentioned that it is very popular in China. Are there other parts of the world that have been looking for this robot?

Actually, in Italy, there are many hospitals that bought it. It has been sold in Taiwan, Emirates Spain, it is well known around the world

Another positive aspect of the robot is the fact that it can disinfect very large areas which you normally can’t do with traditional means without closing down the areas. For example, hospital receptions: these are very hard to close down for hours if you spray substances. With the robot, you can do it in like half an hour 45 minutes. You have all sorts of persons coming to an emergency with or without the virus. So basically you need to constantly disinfect it, so then everything you need right now.

I thank you very much for the information which I’m sure will be very interesting for all or Readers, and I look forward to hearing your updates in the near future and I wish you all the very best for your future endeavors.

And I encourage everyone to start learning robotics!