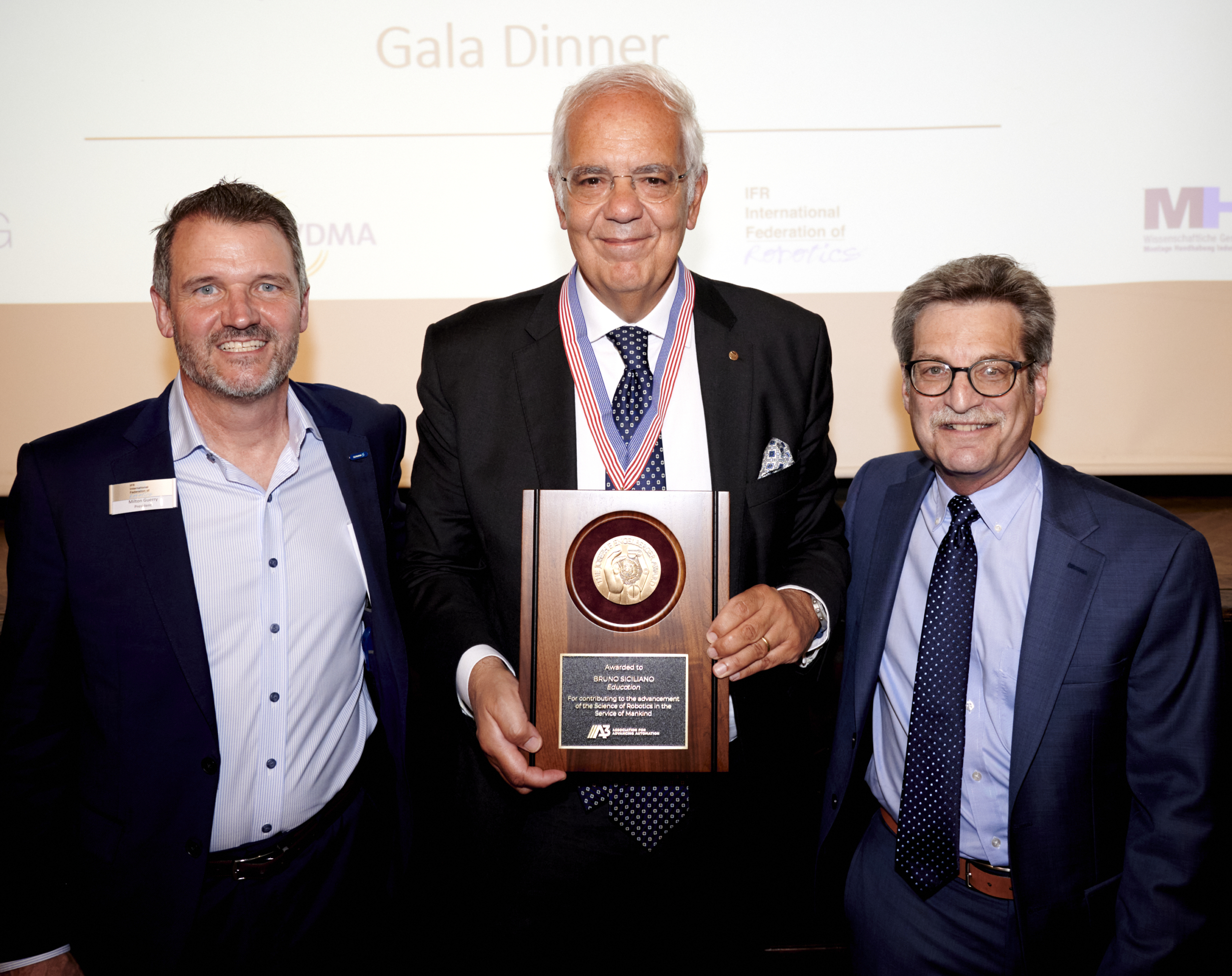 We publish here the interview Bruno Siciliano gave to the Corriere della Sera insert, Login, of 22/07/2022.

Bruno Siciliano is Professor of Automatica at the University of Naples Federico II.

Robotics and AI have a high development gradient

The current industrial revolution, with all its pervasive dimension in terms of robotics technologies and systems, equates to an economic, social, cultural and anthropological revolution.

Compared to the past, today, robot actions are no longer a predetermined sequence of movements, but are performed automatically thanks to a control system that governs motion in relation to what is happening in the environment. Hence the definition of robotics as the ‘intelligent connection between perception and action’ with a cognitive dimension, in relation to the possibility of deciding and planning the actions to be performed; a sensorial dimension, understood as knowledge of reality through the analysis of data; and finally, an actuation dimension with the actions to be performed to achieve the desired goal. Robotics, in connecting the digital world with the physical one, is destined to become the driving technology for a whole new generation of autonomous devices that, through learning capabilities, will be able to interact with the external environment. This explains the neologism InterAction Technology (IAT) introduced to explain how robotics and intelligent machines represent the future of Information and Communication Technology (ICT). Today, ICT is limited at the level of data collection and processing but will unfold its full potential only when it can be used to physically intervene on the environment and on people, to modify the former and assist the latter with the ability to perceive and act in the physical world in real time. While robots used to be confined for safety reasons in spaces away from humans, in new generation factories they have become de facto cobots that operate together with the operator in a safe and reliable manner, or are equipped with autonomy to move and work even in the presence of uncertainty and variability of the environment.

When collaborative robots will become tools that can be used intuitively, too, as is the case with the devices we routinely use without instructions, then we will have a technology that can revolutionize not only our approach to production, but also everyday life. Reducing risks and work fatigue, improving the production processes of material goods and their sustainability, safety, efficiency and reducing the environmental impact due to transport of people and goods, physical assistance to disabled or elderly people, progress in diagnostic and surgical techniques, are all examples where the new IAT will be a tool at the service of mankind.

Also contributing to the efficiency of robotic systems will be 5G, which will pave the way towards a new generation of robots controlled via wireless communication and equipped with new cloud-based data processing and storage resources. Robots that in the near future will operate in environments co-located with humans must have the ability to interact, make decisions and react flexibly to unforeseen events. To do this, the robot must be able to probe the environment and become aware of its surroundings. Improving sensory and information processing capabilities from the outside is crucial, through the use of exteroceptive sensors such as distance, vision and contact sensors. Image and sound processing techniques based on learning (deep learning) have increased the need for high computational resources. Even though the computing capacity and miniaturization of processors have improved in recent years, one cannot imagine housing all the necessary computing capacity in a robot. Being able to connect a robot via a wireless connection with one or more external computers represents an enormous asset that could open the door to a new generation of robots with unprecedented autonomy, safety and reliability. That said, for a robot to function properly, it is necessary that the connection allows a high number of data to be transferred per second and that the time taken to transfer the data is sufficiently small and, above all, predictable, i.e. with constant latency.

With 5G in prospect, robots will be able to be dynamically controlled in real time and connected with people and machines both locally and globally. One can see, therefore, how the Internet of Things (IoT) will be overtaken by the Internet of Skills (IoS), a ‘haptic Internet’ to enable a remote physical experience through haptic devices that match the skills of, for instance, the drone operator or the surgeon grappling with an operation performed via a remote robotic system. What has been described belongs to a future dimension towards which research is heading. But the promise of the pervasiveness of robots and intelligent machines in our society cannot fail to point to a different set of ethical problems and moral dilemmas on which we all need to reflect, as scientists and as humans.

What will be the social impact in terms of the labor market if the use of the advancement of robotics and artificial intelligence (AI) further concentrates power and wealth in the hands of a few? In psychological terms, what will be the fallout from human-robot relations? How can we deal with dependence on such tools? In legal terms, should we consider whether robots deserve to be recognized as ‘persons’ and what are the legal and moral implications of this? The questions are many and must be asked, however, starting from the assumption that a human is a ‘technical subject’ and has always been endowed with tools of freedom and liberation with which we have been able to evolve. In the future, robotics and AI will be two tools with a high gradient of development. Hence, it goes without saying that a profound reflection will have to be opened on the constraints that will have to be placed on progress, so that technology will not become dangerous and alienating but, like politics and economics, will take charge and always account for the needs and centrality of humans in their becoming. (*Engineer Bruno Siciliano, born in Naples in 1959, Professor at University of Naples Federico II. He has just been awarded the Engelberger Robotics Award 2022 in Munich)

(Translation by the School of Robotics)