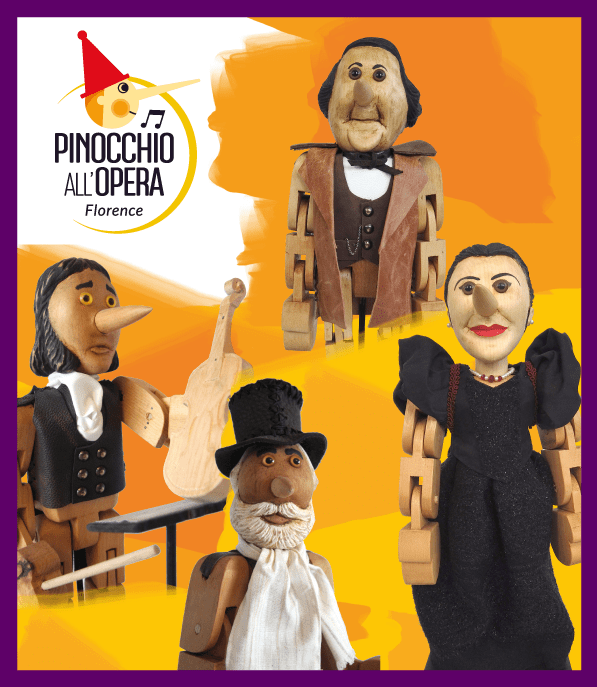 The ‘Pinocchio all’opera’ exhibition was visited by 25,000 people

The ‘Pinocchio all’Opera’ exhibition at Palazzo Ricasoli in Florence features a whole orchestra of robot Pinocchios playing their instruments. Scuola di Robotica collaborated on the robotisation of the Pinocchio orchestra players. We asked the President of the Carlo Collodi National Foundation, Pier Francesco Bernacchi and the Secretary General, Davide Battistini to tell us about this extraordinary success.

Pier Francesco Bernacchi, President of the Carlo Collodi National Foundation
“Pinocchio at work”: a project in the making

The Carlo Collodi National Foundation’s project “Pinocchio all’opera” was born from an idea that the Collodi Foundation presented in 2018 to a call for proposals of the Ministry of Cultural and Environmental Heritage in which many entities participated but only four projects were accepted and among them ours.
In fact, ‘Pinocchio at work’ was evaluated as one of the best projects of the European Year of Cultural Heritage 2018, in second place in a ranking of 500 applications submitted.
In 2018, with the national competition linked to Pinocchio’s birthday, Italian schools were involved in the ‘Pinocchio at the Opera’ project and many students created imaginative works dedicated to the theme of Pinocchio and opera.
Since 2019, an interactive exhibition has been created and promoted for ‘Pinocchio at the Opera’, introducing adults and children to the richness of our opera. The exhibition consists of a series of wooden statues by the artist Mauro Olivotto ‘Lampo’, where the characters have the likeness of the puppet. There are Giuseppe Verdi, Niccolò Paganini, Luciano Pavarotti and many orchestra professors with their instruments.
The exhibition has been on display for six months in the Pinocchio Park in Collodi, has been visited by many people, and now becomes a touring exhibition: a profound homage to Italian opera, our national puppet and craftsmanship.
Since January 2022, Pinocchio at work has been on permanent display in Palazzo Ricasoli, Florence, and is still being renewed. In fact, the project is always in progress, itinerant and enriched with new technologies.
The Pinocchios at the opera have been robotised and move autonomously, each professor with his own instrument and movements.
We are preparing for another event: a large fair dedicated to the world of education will soon take place in Pompeii and the robot opera Pinocchios will go there.
As you see, Pinocchio at work is not a classic definite exhibition, but lives with us and changes according to the times, technologies, new ideas.
A similar exhibition will open in Thessaloniki, and then Pinocchio at work will move to Athens and the
there the robot Pinocchios will take over.
Pinocchio is moving around the world: there are 500 active events, exhibitions and projects on Pinocchio, and Walt Disney recently announced the production of a live action Pinocchio, a reinterpretation of the 1940 Disney animated classic, one of the most popular from Disney’s golden years.
The Carlo Collodi Foundation is very active, but more than us Pinocchio is: just this morning in the Foundation we worked on an archive of Pinocchio translations and they are countless. Every time we have an idea and arrive somewhere, Pinocchio has arrived before us, with his fame and his charge of energy, joy and wisdom. Pinocchio all’Opera is a project created by the Collodi Foundation with the idea of bringing together the universally known figure of Pinocchio and the magical world of opera, an educational project that aims to illustrate these two Italian excellences, Pinocchio and opera.
The project started with an educational path expressed by an interactive exhibition that leads participants to discover the world, the history, the protagonists and the places of the opera. and to discover its characteristics.
The exhibition, now at Palazzo Ricasoli in Florence, presents an orchestra of Pinocchios, with all the members of orchestras, as well as figures who are important to the world of opera and who have brought prestige to Italian opera. We started with four figures – Verdi, Paganini, Toscanini and Pavarotti, a composer, a performer, a conductor and a singer – also to allow the children to identify and play with different characters and thus discover the lives and characteristics of these greats.
The project was then transformed and became a tour of Italy in the name of the world of opera, and at Palazzo Ricasoli the exhibition became permanent and will be open for the next three years. As you will see if you have the chance to visit it, it is spread over three rooms: in one there is a miniature Italy, divided into regions with seventeen characters, one for each region, with reproductions of the various theatres in miniature and with the history of these characters that make it clear that all of Italy is pervaded by opera and culture. Another Italian excellence is presented in this room, the wood from the Dolomites of which Pinocchios are made.
The exhibition thus illustrates and honours several Italian excellences, Pinocchio, opera, the wood of the Dolomites – or rather the craftsmanship, the craftsmanship of modern Geppetto, Mauro Olivotto aka Lampo who made the handmade Pinocchios, and Amadeo Piscino, the craftsman who made the miniature theatres.
But we did not stop there, we introduced another Italian excellence, the genius of robotics, with the collaboration of Scuola di Robotica, which allowed the Pinocchios to come to life and talk to visitors.
In fact, in another room, visitors can dialogue and play with a Pinocchio Giuseppe Verdi who asks visitors questions about the history of the opera: if the answers are right, the Pinocchio Verdi is congratulated, if they are wrong, his nose is stretched. At the end of the game, the Pinocchio Verdi asks the visitor’s name and for each letter of the name he plays a note which, put together with the others of the name, composes a melody. the visitor can take the sheet music of the melody of his own name away with him,
In the third room we find a veritable orchestra of robotic Pinocchios, 40 elements about 40 cm high. Each Pinocchio represents a professor of the orchestra with his own instrument, and as a whole the orchestra plays in a cycle The Triumphal March from Aida, Paganini’s Rondo, and the overture to Rossini’s Gazza Ladra.
This is the journey of Pinocchio at the opera, the exhibition that has been visited by 25 thousand people in six months, an excellent response from schools and cultural tourism.
The future of Pinocchio all’opera foresees the enrichment with other characters being able to go beyond the Italian borders since opera is a heritage of mankind – opera has in fact been recognised as world intangible heritage – by identifying other important performers of opera, composers at European level, and since the project will continue with a travelling exhibition, we are identifying partners in each region who can adopt their pinocchio character and host the exhibition in one of their venues, which can be a theatre, a house of birth, a museum, allowing them to add our educational itinerary to the offerings of their institutions.
In addition, we will add an online game that allows visitors to the exhibitions to play with their Pinocchio at work and complete a tour of Italian opera by collecting stamps on their ‘musical passport’.