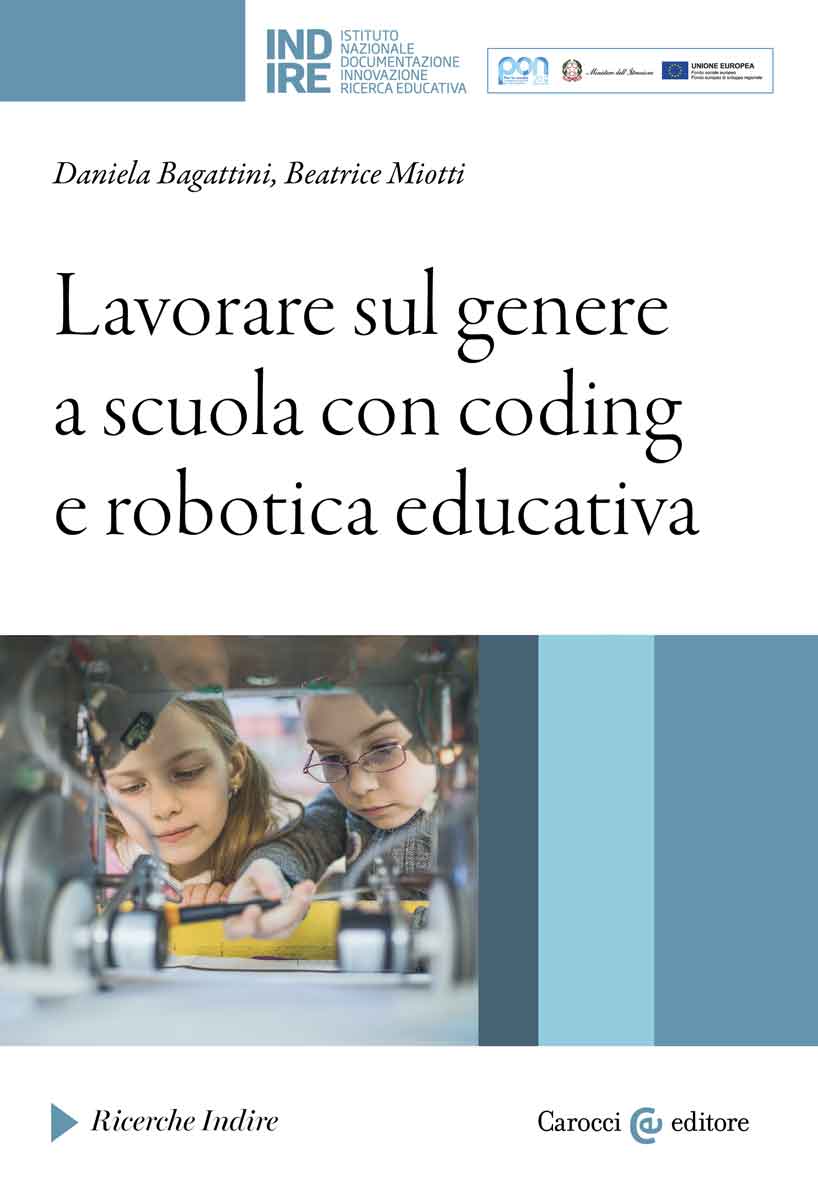 The book “Working on gender at school with coding and educational robotics” (Lavorare sul genere a scuola con coding e robotica educativa), written by INDIRE researchers Daniela Bagattini and Beatrice Miotti, has been published in Italian by Carocci editore.

As the authors show, the gender issue should be an integral part of the questions to be asked when teaching and studying.   Starting from the results, read from a gender perspective, of the PON Coding and Robotics project conducted in the years 2019-2020, the Authors present the results of a complex investigation carried out with the teachers participating in the project on the role that educational robotics could play in overcoming gender stereotypes at school and in learning.

We asked the Authors about the making off of the book, the story of how it came into being and how it ended.

The book can be downloaded free of charge after registering here: http://www.carocci.it/index.php?option=com_carocci&Itemid=72&task=schedalibro&isbn=9788829015474.

The forewords are by Emanuela Abbatecola, sociologist and associate professor at the University of Genoa, co-founder and editor of the journal “ag -AboutGender. International Journal of Gender Studies’, and Fiorella Operto, vice-president of the School of Robotics (Genoa), which she helped to found in 2000.

Our interest about educational robotics in gender education

by Daniela Bagattini and Beatrice Miotti

Our encounter took place informally: although we both work at INDIRE, our first exchanges occurred on the train, on the route we took every day as commuters to our offices; an informal moment, therefore, as are usually those in which the best ideas are born.

Daniela Bagattini  was already working on gender issues, on gender violence, both in INDIRE and outside, and it was a time when INDIRE was starting to talk about these issues. Beatrice Miotti had already been working on robotics and coding for a few years.

We started sharing our research and linking the Coding and Robotics Project, funded by the Programma Operativo Nazionale, PON, the Italian Operational Programme (1) that was taking place in INDIRE with my research on gender. The project involved 116 teachers, 25 pairs of which were made up of a preschool teacher and a primary school teacher engaged in a coding activity designed to be carried out vertically across the two orders; the other 44 pairs were made up of two secondary school teachers from different disciplines who were asked to carry out interdisciplinary activities with educational robotics (in particular using Arduino CTC101).

Exchanging our reciprocal experiences, we came up with the idea of analysing these activities also from a gender perspective, and so we started to study the topic in the literature and discovered that in Italy there was very little on this subject, while international publications were many and valid: one of the central themes was related to the potential of these methodologies with respect to girls’ perception of self-efficacy with ICT and in STEM disciplines.

We thus decided to extend the initial research activity, which originally only involved documentation by the teachers mainly related to their design skills and the Think Make Improve design cycle implemented both in the construction of the activity by the teachers and during classroom lessons, by also asking for observations on the girls’ attitudes towards the project. Unfortunately, Covid did not allow us to do what we set out to do with observations and we had to revise our research protocols.

Since the project required three reports to be completed by the teachers, we decided to include a generic question on this topic in the third one, which was deliberately left vague (do you notice differences in the approach to work by boys and girls and in their performance?).

Here it is important to remember that the initial project did not provide any training or instructions on this issue, so the teachers did not know that they had to pay attention to this aspect.

There were various types of response: those who saw no difference, those who saw differences and considered them almost ‘natural’, in the sense that they were referred to a certain type of attitude that was more impetuous, more dynamic on the part of the males, more rational on the part of the females, taken for granted. Others who saw differences in approach in the project; among them one who had noticed openings in the project itself on the part of the girls, who had approached coding or robotics in one way and then changed their attitude. This was the interesting part for us because our aim was not to investigate any stereotypes in the teachers’ eyes, but to see if there were any possibilities for change in the girls’ perception of STEM thanks to the project.

At this point, we decided to organise focus groups with teachers who had noticed these differences, to understand with them how this had happened; hence the idea of developing those contents into a volume, which could stimulate a debate on the subject in our country as well. In fact, there are now many publications on gender education, on how gender constructs affect school performance; at the same time, there is an interesting strand for the promotion of STEM disciplines for girls, but we felt that there was a lack of connection between STEM and sociology: in a way, between the engineer, Beatrice, and the sociologist, Daniela Bagattini.

On the basis of the literature and what emerged from the interviews and discussions with the teachers, we tried to understand under which conditions coding and robotics worked as a transformative element: which elements of coding and robotics fostered an increase in girls’ interest?

Of course, no methodology alone can remove stereotypes that have worked for centuries. On the contrary, there may be a danger that technology will reproduce stereotypes: think of the risks of Artificial Intelligence, which develops on previous models and can reproduce, multiply and spread those same stereotypes by putting a stamp of objectivity on them: technology said it.

This is one risk.

Another is the consequent risk of attempting to bring girls closer to ICTs by “feminising” them, i.e. developing projects that work on themes that are considered appealing to girls (e.g. fashion): perhaps this may work in the short term, but it is a very risky ploy, which in reality risks reproducing a stereotype, maintaining a separation between the two worlds, when coding and robotics can work precisely as barrier breakers, promoters of interdisciplinarity, especially if we consider robotics and coding not as subjects but as methodologies. As different disciplines are still connoted as male or female, if we go and work on several disciplines together – which will then be the professions of the future – perhaps more girls will approach them with less fear.

Fear is a central element in interpreting not only girls’ still sectorialised career choices, but also their results in mathematics (INVALSI), which are not linked to biological characteristics, but to a different approach to these disciplines, with a lesser sense of self-efficacy than boys, because from an early age they were told (or made to understand, even indirectly) that they had to do something else and therefore did not have childhood experiences.

School should help deconstruct this and the practice of robotics can help girls realise that they are just as capable as boys.

We are hopeful, something is moving.

A reflection on the effects of the lockdown: how quickly did we all have to learn to use tools that we had never used before and that we perhaps thought we were incapable of using? Think of families in particular: how many mothers had to learn to use platforms, the Internet, computers to keep up with children in DAD: they learned very quickly; had they ever realised before that they could do it?